It sounds like a bad fairytale that one had never thought to read before. In our fairytale-hood magical sprinkle flows around. In real-time, some long-range missiles target our peaceful today and strike. You see, our roads are now not going anywhere but war-shattered. You hear the deep silence through the bombardment. Homes… or actually dreams falling apart. The city is haunted.

Raisa, a good cook, loved googling new recipes on weekends. She was grating some extra cheese to spread on pizza a week before. With the same cheese graters, Raisa today grating polystyrene. She is making the Molotov cocktails… to protect her home, land and life. Yes, it is a constant war! And it is tiring. We don’t want war. To free ourselves from war, we are into war. The boy standing on the playground turns to the graveyard, feels a group of zombies, comes out from his phone, and attacks the Building where he lives. That Building is now a skeleton made of charcoals. But the boy saved the pages of Love Story in his pocket, smiles seeing the abandoned piano mid of the ground; starts playing softly, gently and prayerfully- ‘Heal the world … make it a better place.

Hey, first world! Hello, developed countries! Hi, West diplomacy! What more to express that you realize in your head and headlines the only one message for the sake of humanity and rights – Stop any war anywhere … now and forever!

Photo via Pexels by Artem Podrez 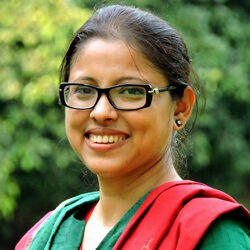 Ireen Sultana
Ireen Sultana is an activist, columnist, writer, poet and traveller. Her writing reveals the challenges and barriers to women’s rights, beauty and degradation of nature and rivers. Ireen is leading a campaign to publish literature in Braille so that visually impaired people can read. Ireen is a computer engineer and former IBMer who turned into a journalist by profession.

Racism in focusing War & Conflict: An Invisible Barrier towards achieving Global Peace
Piece by Peace
For Saving the World, We want the Protection of Life and Nature on Earth
War is no solution to any problem - when will we ever learn?
1 2 Next »